During his VC action, he had both legs severed by a shell, but still continued to give orders until taken away from his gun 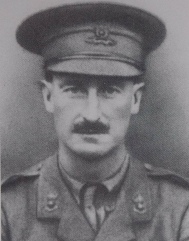