VC action was witnessed by Winston Churchill who took part in the same action, later saying it was the bravest act he had ever seen performed 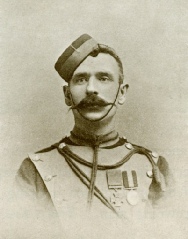