George Findlaters Victoria Cross was awarded at Netley Hospital, Southampton, when he was recovering from wounds from his VC action 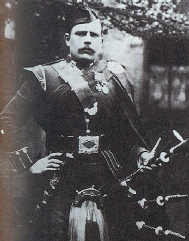