He won the VC on his 26th Birthday

Thank you to Michael, Kate & Ruth Pagan for photos of the Victoria Cross Memorial Glasgow 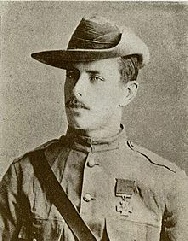