As posthumous award wasn't made until 10 years after the event, VC is not shown on headstone 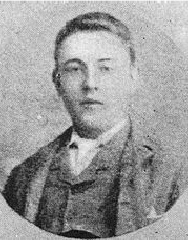