Brass plaque at the Cathedral of the Resurrection, Lahore, Pakistan 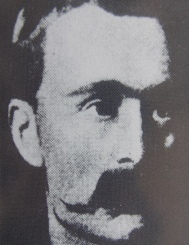