A committed Christian with strong Christian beliefs, he made the decision to join the RAF in 1941 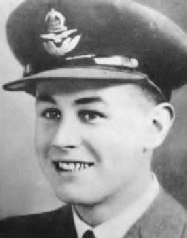