The original VC citation was lost in an air crash, carrying General Wingate, so he was the last VC to be gazetted during the Second World War 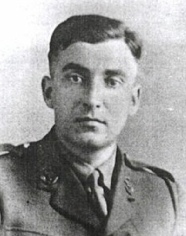