He was informed of his VC award at a full parade called by the commandant of his P.O.W. camp in Germany 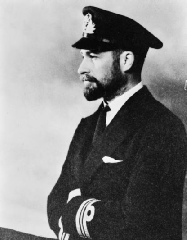