His Victoria Cross was one of several stolen from the National Army Museum, Waiouru, New Zealand, but they were recovered after a reward was put up for their return 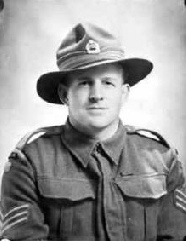