He was gazetted as posthumous, presumed killed in action, but he was actually taken as a POW surviving severe wounds and acute malaria. 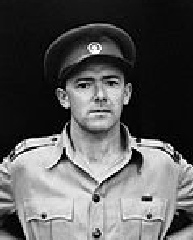