Place Of Death   In a flat owned by The Grenadier Guards Association, Leeds, Yorkshire, England

VC gazetted as posthumous as he was presumed dead after his VC action, as a POW in Stalag 20a his award was announced by the Camp Commandant on Hitler's orders. He is believed to be the first VC to be awarded the award twice, once to his ‘widow’ 6th August 1940 and on being repatriated 22nd June 1945, from the king. 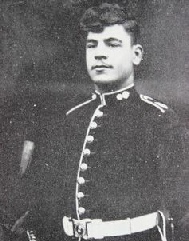