P  Named on Past Presidents Board, Secunderabad Club, Hyderabad, India

Served in the forces alongside 5 of his brothers 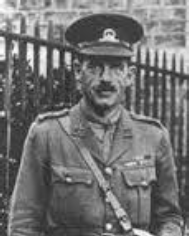