He is buried alongside the poet Wilfred Owen, who was in the same battalion 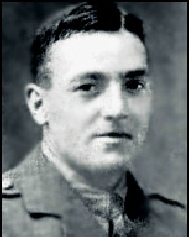