Place Of Death   At his cottage, Clearwell, near Coleford, Gloucestershire, England

A new headstone was erected in November 1985, and was renovated in May 2004 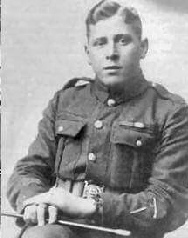