In a period of just Five weeks in 1918, he won the DCM, MM and the Victoria Cross 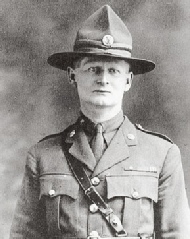