In later life he was Under Secretary of the Ministry of Works for Scotland, looking after Government buildings 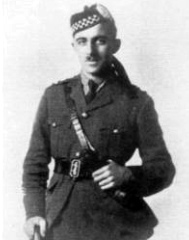