Born in Minnesota, United States of America, he was one of five American born recipients of the Victoria Cross 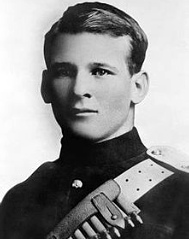