After the war he spent 20 years as a wildlife and fire warden in New Brunswick, Canada 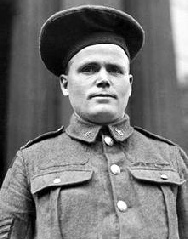