Place Of Death   East of Framerville, near Amiens, France

He was twice rejected for military service, but after corrective surgery for a hernia he was accepted 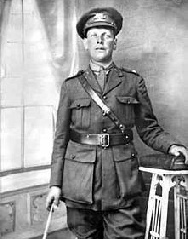