He was killed after being hit by pieces of a broken circular saw while cutting logs at his sawmill in Cuffley, Hertfordshire 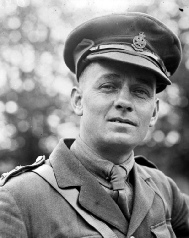