After the war, he was in and out of medical institutions for the rest of his life, with what is now known as Post-traumatic Stress Disorder (PTSD). 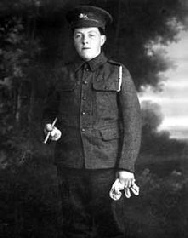