Place Of Death   At his home, Poplar, Millwall, Isle of Dogs, London, England

Awarded the Bentinck Medal, created by Major-General Sir Henry Bentinck KCB and awarded for gallantry, one of only thirteen issued during the Crimea campaign for distinguished conduct

Also the Weybread village sign has a Victoria cross on it to commemorate their famous son.

Being in a trench before Sebastopol, a shell was fired and landed in the trench amongst the ammunition. Without hesitation he threw the shell out, which when it touched the ground exploded. His prompt action saved many lives 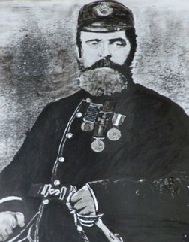