Place Of Death   Bay of Biscay, off Finisterre

Buried/Location Ashes  Lost at sea in Bay of Biscay off Finisterre, Spain

Drowned when HMS 'Captain' capsized in storms. The VC lost with the ship

With 65 Buckley and 67 Robarts, landed on a beach near Genitchi and set fire to stores and ammunition destined for Sebastopol. An early commando raid. 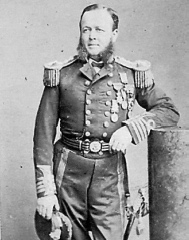