Was gunner from the ship HMS Ardent

Sold at auction believed to be in private hands

With 65 Buckley and 66 Burgoyne, landed on a beach near Genitchi and set fire to stores and ammunition destined for Sebastopol. An early commando raid. 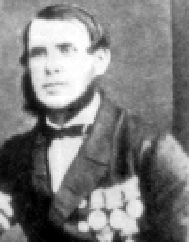