Originally part of the collection of the Maharaja of Patiala, Bhupendra Singh and bequeathed to people of the Punjab by his son Maharaja Yadavindra Singh

When on picquet duty, he attacked several Russians who were attacking a lieutenant-colonel who was lying wounded on the floor. He killed two, and kept the others at bay until help arrived. 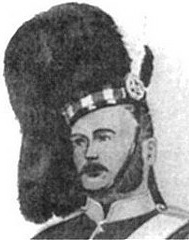