Whilst working for Ordnance Survey he got into an argument with a man who insulted the VC. Later, police were called and he pulled out his revolver and put it to his mouth and fired. Inquest recorded "Suicide whilst of unsound mind"

No VC, his only remaining medal is at the Durham Light Infantry Museum, Durham

November 54; when the regiment was given the order to retire, he went back under heavy fire and brought back a wounded comrade. May 55; he fought and killed the enemy in hand to hand combat thus saving his position. 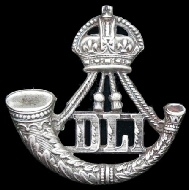