Believed to have been killed following his VC action and gazetted as posthumous, he actually had been taken as a POW 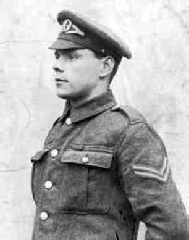