Just before the war he was living in Glasgow and working in the John Brown Shipyard. 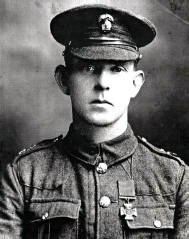