He was gazetted 13th February 1918, two days after he died of wounds in a German P.O.W. Camp 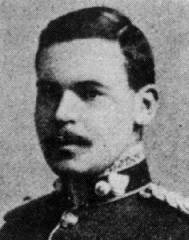