He joined the Rifles at the start of the war, then the Flying Corps, next the Royal Navy, before going back to the Army and the London Regiment 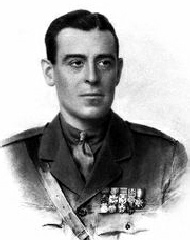