As a private he rallied the troops around the colours, at the Battle of Alma, helping to steady the line. 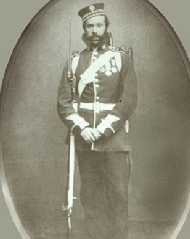