Serving as a private in the Rifle Brigade, he was in the trenches before Sebastopol, when a live shell landed in a crowded trench. He tried to knock out the fuse with his rifle butt, when that failed, he picked it up and threw it to safety, thus saving many lives. 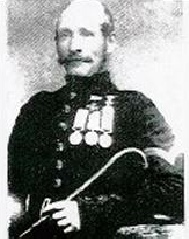