During the Second World War, he rejoined the Army, he lied about his age, he was 52. He was captured by the Japanese in Java 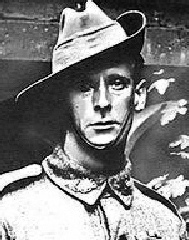