He emigrated from Wales, just before the war to Australia, enlisting in August into the AIF 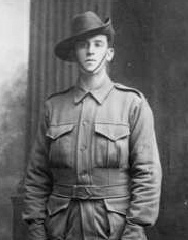