Place Of Death   No. 7 Casualty Clearing Station, near Loos, France

Before the war he was working at the Treasury of Quebec 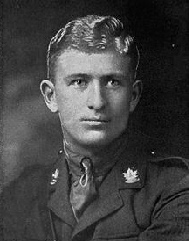