Their are a number of War Memorials around Kent with Colyer-Fergussons name on it, as they had homes at Ightham and Gravesend 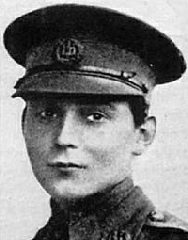