His Victoria Cross was presented to the Museum in November 1977 by his widow, Valeska 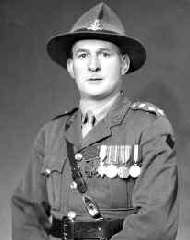