Its unknown if the grave was unmarked, destroyed by bombing in 1940 or cleared on 1950’s

Whilst carrying out an attack on the Redan, he climbed a ladder to the top of the parapet, then threw down gabions to bridge the ditch, under heavy fire until badly wounded 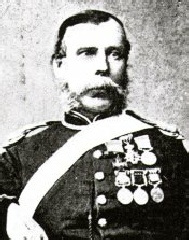