Born in London, he Emigrated to Canada, but returned to became a Metropolitan Policeman, before leaving for Australia in 1910 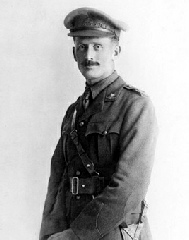