During the Second World War he was Commandant of a prisoner of war camp at Cranwich, Norfolk 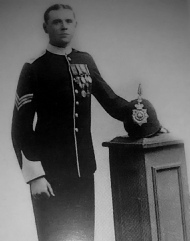