Place Of Death   Went down with SS 'Otaki' after encounter with the disguised German raider 'Moewe' 350 miles east of the Azores, Atlantic Ocean 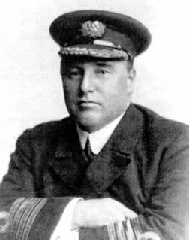