Bust in The Guildhall, London

Lieutenant-Governor of Windsor Castle 1952 until his death in 1963 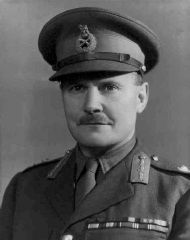