He used to laugh at his name being Tom Edwin Adlam, TEA 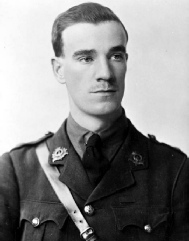