Mount Kerr was named after him in 1951, one of 6 Mountain's in the VC Range in the Jasper National Park, Canada 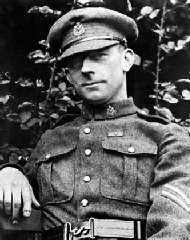