During the war he amassed quiet a sizeable charge sheet, due to being very strong willed 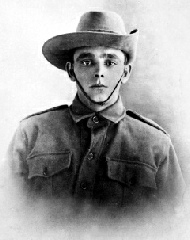