Wallet containing two letters to his parents and original citation written by Lieutenant-Colonel Sherbrooke at the Museum of The Queen's Lancashire Regiment, Fulwood Barracks, Preston, Lancashire

He was in Canada at the time war broke out, he made his own way back to England to join up 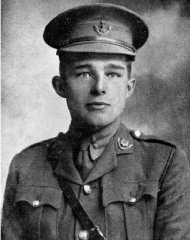