On his return to Birmingham after winning his Victoria Cross, he was greeted by the Mayor, Neville Chambelain 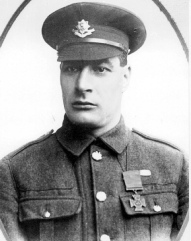