The Victoria Cross had always been in the family, until they gave it away to the Royal Inniskilling Fusiliers Museum 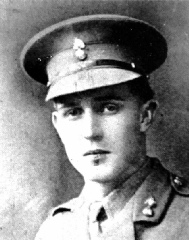