Named in the Roll of Honour at Radcliffe and Bury Parish Churches, Lancashire 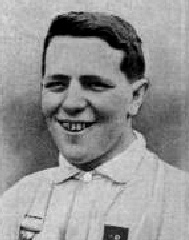